Shri. S. Shivakumar, is an exponent of Bharatha Natyam, learnt from gurus Smt.Chandra Dandayuthapani, Sri.M.V. Narasimhachari and Smt.Vasanthalakshmi. He is Freelance Solo, Duet, Group Performer and Guru with 30 years of experience in the field and also an 'A' Grade Artist in All India Doordarshan Kendra. He has established SHIVAKALALAYAM Academy, with an ambition to promote Art & Artists. He has served as an Assistant Professor for Masters Degree in Bharathanatyam in Kumarani Meena Muthiah College (Affiliated with Annamalai University) in adayar, Chennai. As a life time member in Association of Bharathanatyam Artistes of India (ABHAI), also served as Treasurer & Joint Secretary.

Shri. Shivakumar, an exponent of the Sacred Classical Art Bharathanatyam, which has been cherished & preserved in our country for more than 2000 Years. He was born in a small town called Devakottai in Ramanathapuram District, after moving to Chennai for studies, he started his dance career at the age of 12. He started learning Bharathanatyam from Guru. Smt.Chandra Dandayuthapani Pillai at Natyakalalayam for 8 years. Then he moved ahead to do 2 yrs Diploma in Nattuvangam from Guru Sri. Seetha Rama Sharma through the Scholarship from Tamilnadu Government's - Eyal Isai Nataka Mandram. He got selected for the Sangeeth Natak Akademi's fellowship for advance training in Nattuvangam & Vocal for Dance. He has also worked with senior Gurus like Sri. K.N.Dakshinamurthy Pillai from Delhi (the younger brother of Padmashree K.N.Dandayuthapani Pillai), Smt.Malathi Srinivasan, and Smt.Usha Srinivasan. 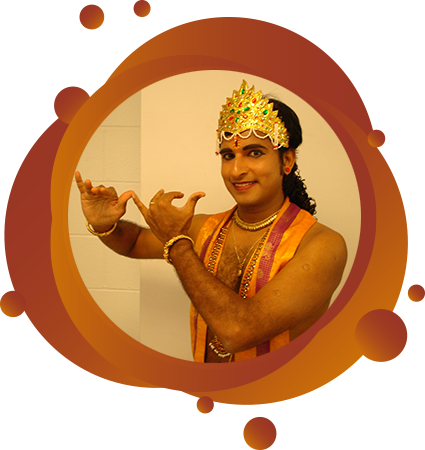 Apart from the above Natyacharya Shri.S.Shivakumar has received many Awards & Titles, the prominent amongst them are:-

The Dancing Duo believes that dancing is their way of praying to the almighty and undoubtedly, they do it with great devotion and dedication.

The Profile of Guru. Shri.S. SHIVAKUMAR 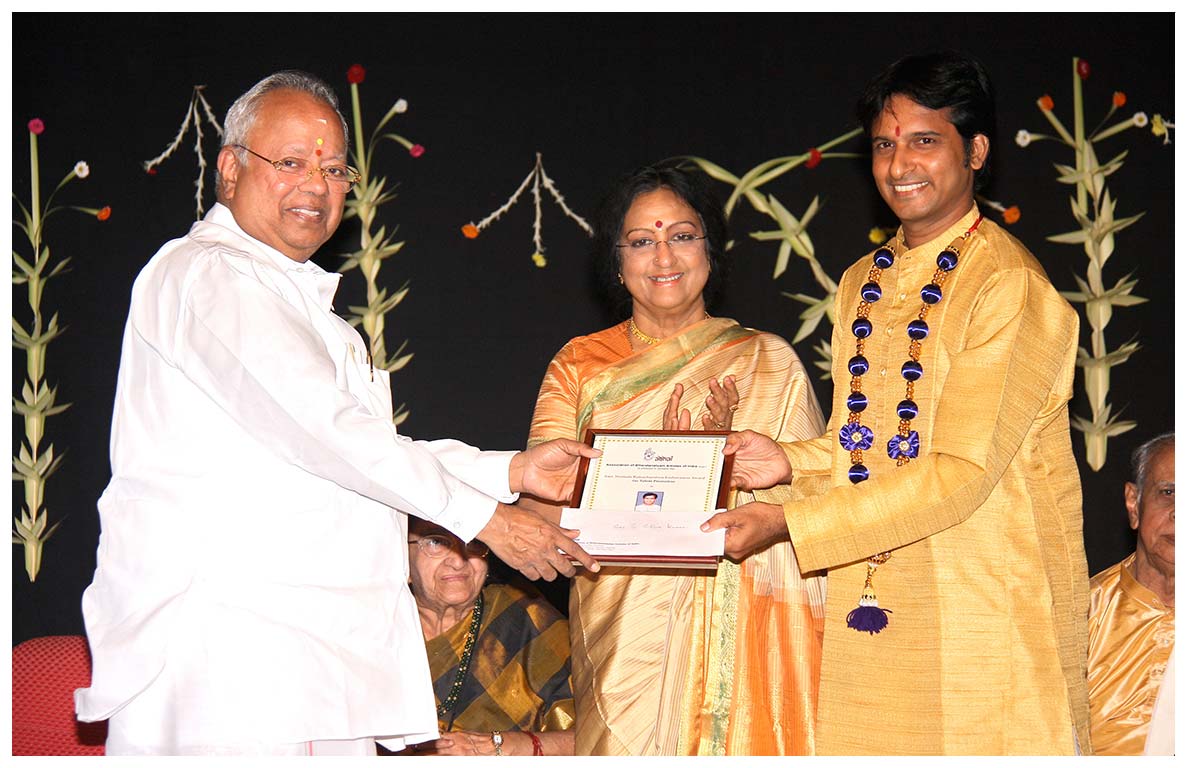 Shri.Shivakumar has several performances to his credit, the prominent amongst them are:

Performed along with Smt. VyjayanthiMala Bali at NaradhaGana Sabha in a ballet about Mahavir Jain during Dec-2002.

Performed in many dance ballets of Dr.Saraswathy Sundaresan and Choreographed many compositions of world renowned singer Dr.Balamuralikrishna, all over india organized by Vipanchee Arts Academy.

Choreographed and Performed 13 Variety of Classical and Folk dance in World Trade Conference and in the Welcoming Rally for the Queen's Baton in the Common Wealth Games at Chennai during 2010, organized by Tamilnadu Govt Tourism Department.

Choreographed & Performed dance ballets many times for the Pyramid Spiritual Society in their meditation conference.

Performed along with Cine fame Ms. Meenakshi Seshadri at Mumbai on occasion of "Videocon Screen Awards in 2001".

May - June 2004 toured U.S.A with Guru Sri.M.V.Narasimhachari for a Dance ballet called "Land Scape of Emotions", also conducted dance workshops & Lec-dems in various parts of America during the tour.

Sep - Nov 2004 toured U.S.A for performing in a dance ballet called "Gajamukha", the same has been performed at 26 cities in America. Also conducted many workshops & lec - dems during the tour.

Apr - July 2005 worked as a Dance tutor, in a London based dance school called 'Srishti'.

Nov 2018 Toured to Taiwan for performing THIRUKKURAL Dance Ballet in the Buddha festival.

On Nov 23rd 2008, he is awarded as a great performer & Guru by the Bharathanjali Trust and titled as " SATHYA MANORANJANA SUNDARAM " (Meaning : The Artiste, who enthralls the audience with his proficiency in 'Hasya Rasa').

He is the recipient of " NATYAKALA VIPANCHEE " Award in 2007, awarded by the great music maestro Dr.Balamurali Krishna on 31.12.07.

He has received the Best Dancer Award 2002, from the Governor of Tamilnadu Sri. Ram Mohan Rao organized by Nrithyopasana.

He is not only a Performing artist, also a successful teacher and outstanding choreographer. Some of his successful choreographies are: -

Done part of the choreography in abroad productions like Gajamukha (U.S.A), Mirage (London).

He has choreographed his part role, in most of the productions of the renowned dancer's like Smt.Saraswathy Sundaresan (Vipanchee), Sri.Madurai R Muralidharan, Smt.Parvathi Ravi Ghantasala, Smt. Srekala Bharath.

Choreographed many dance items, margams and successfully conducted numerous Sabha programs, Arengetrams & Salaingai pooja to his students. The success behind his choreography is selecting the dance song according to the age & potential of dancer.

His strict approach, adherence to the classicism of Bharathanatyam, ensures training with a strong foundation firmly rooted in tradition. He has promoted and trained many professional dancers & Nattuvanars in India and abroad. His teaching style and method adoption is appreciated by most of the renowned gurus who knows about him and his institute. Some of the assignments handled by him are mentioned below:-

Worked as an Assistant Professor for Masters Degree in Bharathanatyam in Kumarani Meena Muthiah College - Chennai, in affiliation with Annamalai University, Chidambaram.

Worked as a Guest lecturer in 2005 for 3Months in Srishti Dance School, London.

Worked as Dance master in K.N.Dandayuthapani Pillai's Natyakalalayam Dance School for 8years. Served as Treasurer, in Association of BHarathanatyam Artists of India (ABHAI) for 7years.

With all the above credits, he is the Founder Director of "SHIVAKALALAYAM (Regd)-School of Fine Arts" at Thiruvanmiyur (Since1996), successfully functioning with many branches in Chennai. Through his academy he and his wife Smt. Sailaja Shivakumar, trains a lot of budding artists in Bharathanatyam, Nattuvangam, Mohini Attam & teaching course in Bharathanatyam. Being the Founder Member, he has a lot of future plans to bring dance especially Bharathanatyam into the International Limelight. He is also the committee member in Association of BHarathanatyam Artists of India (ABHAI), through which he is rendering lot of service to Arts & Artist community.

Dancing is his way of praying to God & undoubtedly, he does it with great devotion & dedication.

Smt.Sailaja Sivakumar , is one of the senior disciples & wife of Guru.Shivakumar, has started learning from Guru.Ms.Padma at a very young age and continued advance course from Gurus Shivakumar & Narasimhacharis. She is a reputed dancer & teacher who can perform and teach Bharathanatyam & Mohini Attam.

She started learning this art at a very young age of five, under the tutelage of her Guru Miss R.Padma & later moved ahead to do an advance course in Bharathanatyam & Nattuvangam from Guru Shri.Shivakumar at " Shivakalalayam School of Fine Arts ". She had also learnt Mohini Attam from Guru. Smt. Maya Vinayan & successfully completed her arengetram with lot of applauds. Her achievements in these art forms are mentioned below:-

Got selected for Talent Revealing Opportunity Programme at VDS Arts Academy & given a Solo performance on June 6th, 2000.

Performed Mohini Attam arengetram in the year 2003 at Varasidhi Vinayagar Temple under the guidance of Guru. Smt.Maya Vinayan. 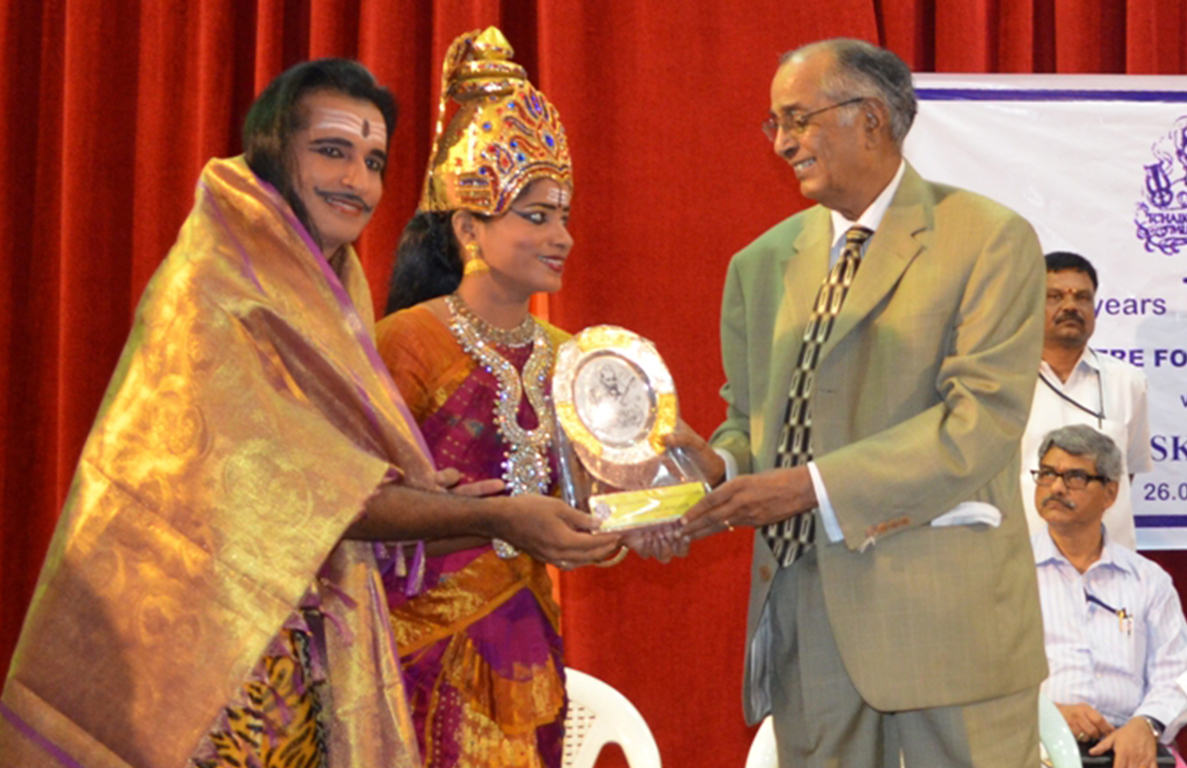 The Profile of Guru. Smt.SAILAJA.SHIVAKUMAR

Performing along with Cine fame, dancer padmasree. Ms.Shobana in many of her dance productions all over India for the past 8years.

Participated in the IDA programme held at "Narada Gana Sabha" in July 2003.

Very active member of ABHAI (Association of Bharathanatyam Artists of India) for the past 5 years. Has taken part in the monthly workshops and performed in the annual day functions.

Performed at the 44th anniversary celebrations of Doordarshan (Live telecast) held on the 16th of September, 2003 at Raja Annamalai Mandram.

Choreographed a variety dance for Chettinad Vidyashram & Anna Gem Science Park Schools with 50children, for the annual day function.Mar-2006, Performed in the festival at Government Music College chennai, organized by the Tamilnadu government.

Given lot of Solo performances in many Temples, Fairs & other cultural events.  Performed in Natyanjali festivals held at, Chidambaram, Tanjore, Nagapattinam, Thirunallar Kumbakonam and Kalahasthi.

In 2011 Performed in Raja Rajeswaram 1000 at Tanjore big temple.

Sep - Nov 2004 toured U.S.A for performing a dance ballet called "Gajamukha", the same has been performed at 26 cities in America. Also conducted many workshops & lec-dems during the tour.

Dec 8th 2007 Performed at Abudhabi Palace along with Actor Dancer Ms. Shobana, on occasion of the Asian Business Award function.

She is the recipient of " NATYA KALA VIPANCHEE " Award in 2010, awarded by the great music maestro Dr.Balamurali Krishna and Dr.Saraswathy on 31.12.10.

In 2003 Natyakalalayam has awarded " NATYA KALA RATNA ", The award was presented by Violin Maestro Shri.Kunnakudy R.Vaithyanathan.

In 2001 Shivakalalayam has awarded the title " SHIVAKALAMANI " for successful completion of Diploma in Bharathanatyam.

As they say, high achievement always takes place in the framework of high expectation by setting high standards and expectations for herself, she continues to scale heights in her own way. To put it in simple terms, Dance runs in her blood.